1904 Olympics Marathon: The most bizarre ever?

The marathon at the Summer Olympics is the only road running event held at the multi-sport event. The men’s marathon has been present on the Olympic athletics programme since 1896. Nearly ninety years later, the women’s event was added to the programme at the 1984 Olympics.

America’s first Olympics in 1904 may have been its worst, or at least its most bizarre. held in St. Louis, the marathon was a total mess: The first place finisher did most of the race in a car, the guy in second almost died from eating rat poison, and the fourth place finisher raced in dress pants and shoes, and took a nap by the side of the road for part of the race.

First off, the entire course was very dusty and breathing in that dust caused all kinds of injuries, including one runner who was hospitalized with hemorrhaging after the dust tore his esophagus and stomach lining. The organizer of the race purposefully withheld water in order to test the effects of dehydration. So the whole thing was a nightmare from the start.

The first-place finisher, Fred Lorz, hitched a ride in a car to the end of the course after he was struck with serious cramping. He got out shortly before the finish line and crossed it, which fooled some of the onlookers. He claimed he did it “as a joke.” 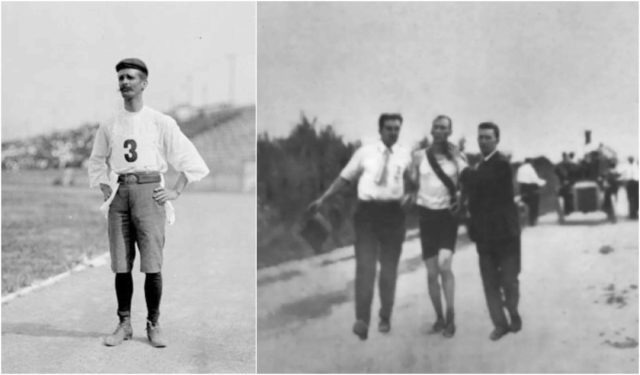 The second-place finisher, Thomas Hicks, was given a mixture of egg whites and strychnine, a poison that is often used to kill rodents or birds, as an attempt at a performance-enhancing drug becoming the first recorded instance of drug use in the modern Olympics. Strychnine, in small doses, was commonly used a stimulant, and at the time there were no rules about performance-enhancing drugs..He was carried across the finish line by his handlers.

The fourth-place finisher, Andarín Carbajal, was a Cuban national who raised money to attend the Olympics by running the entire length of Cuba. He gambled away all the money when he arrived in the States, and showed up for the race in dress clothing. Thankfully, another runner used a knife to cut his pants into shorts. Carbajal stopped at a roadside orchard for a snack during the race, but the apples were rotten so he was struck with stomach cramps and had to sleep it off.

Len Tau, one of the South African participants, was chased a mile off course by wild dogs. Sam Mellor, also experienced severe cramping. He slowed to a walk and eventually stopped.

Such were the bizarre moments witnessed at the 1904 Olympics.

When Khutulun came of age, Kaidu wanted to marry her off. Khutulun, however, declined, setting the condition that she would only marry the man who was able to beat her in her favorite sport