Super Eagles coach Gernot Rohr may have foreclosed the possibility of inviting any player from the domestic league for next month’s 2021 AFCON qualifiers against Benin Republic and Lesotho.

Though many football faithful have long been canvassing for the inclusion of home-based players in the Super Eagles , Rohr has consistently maintained that there is a gulf between players in the domestic league and their counterparts in Europe.

Fresh from watching the CAF Confederation Cup match between Rivers United and Enyimba in Port Harcourt on Sunday, the vastly experienced German said he was unable to identify any player to fit into the current Super Eagles set up.

“It was an interesting match; two teams very close to each other,” the 67-year-old said of the dramatic game that ended in a 5-4 penalty shoot-out win for Enyimba.

Yet the former Bordeaux coach stated further that some of the players on both sides at best can feature for the Super Eagles B Team, adding he did not see any that can displace his legion of overseas stars. 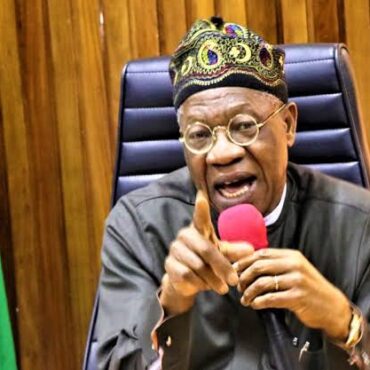 Minister of Information, Lai Mohammed has given reason the federal government will not destroy forests where bandits use as hideouts to carry out kidnappings in the country. Mohammed, speaking with Channels Tv on how to eliminate bandits, said the ecosystem will be affected if the government destroys the forests. He noted that the better solution to eliminating bandits from the forest was to have better consultation between sub national government, […]