APC Primary: Fayose Warns Tinubu Against The Danger Ahead Of Him 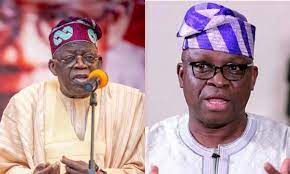 Ayodele Fayose, the former governor of Ekiti State, has advised the presidential aspirant of the ruling All Progressive Congress (APC), Bola Ahmed Tinubu over his recent statement in Ogun State.

Fayose wrote an open letter based on his “observed views and the attached possible dangers,” to the National Leader of the ruling All Progressives Congress (APC).

But Buhari disclaimed the statement that he becomes the president with the support of millions of people and not by Tinubu’s support.

In reaction to the contention, Fayose wrote his open letter, which reads:

“I am writing based on my observed views and the attached possible dangers about your good-self against tomorrow.

“I equally read the reactions of your political allies both in the North and in the South. The reactions gave me great cause of concern for you and your life. Again, I see danger!

“As a knowledgeable student of history whom you are; our great late sage, Chief Obafemi Awolowo and the celebrated winner of the June 12, 1993, general election; Alhaji Moshood Kashimawo Olawale Abiola, were led to the Golgotha by self-acclaimed “champions of democracy.” I am sure the same people may advise you to ignore my advice.

“Going by the handwriting that are now clearly on the wall, if I may comment sir, I see you as one that may be swimming against the political tide of the cabal in your party. They are equally preparing for your actions and reactions and are fully set to contain same as they did to both Awolowo and Abiola.

“Unfortunately, your kingdom has been badly balkanized if what happened in Abeokuta is anything to go by.”

Fayose also advised Tinubu to meditate on  “Proverbs 22:3,” a verse in the Bible that states “Sensible people will see trouble coming and avoid it but unthinking people will work into it.”

He said, he left him with his decisions.

Senetor Ibikunle Amosun, a presidential aspirant on the platform of the ruling All Progressives Congress, APC, has condemned and sympathized with the victims' family over the attack on St. Francis Catholic Church, Owo, Ondo State, where more than 50 members of the congregation were killed by the gunmen during service. Bola Adeyemi on behalf of his media team, has revealed in a statement signed by him, that Amosun was grieved […]