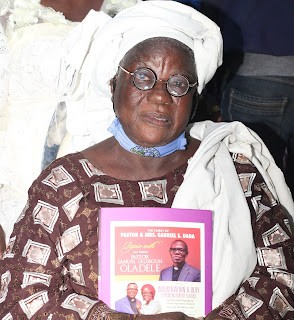 The wife of the former President of Christ Apostolic Church, Nigeria and Overseas, Mrs Victoria Adeyoola Akinosun is dead.

She died on Monday, November 22, at a private hospital.

According to her husband, former President, Pastor A. O. Akinosun, his wife was in perfect health until they returned from the wedding of the last child of the marriage in Ilorin.

He said, “It was a brief illness that took just two to three days,”

He added that “mama being a very strong woman was the one that went to get all the things needed for the wedding of the baby of the house, Yomi at Ilorin.”

“She did not exhibit any sign of sickness until when she was returning from Ilorin.”

“When she couldn’t eat and she felt ill, she was taken to a family doctor at Idiobi. She was immediately treated and the doctor assured us she would soon get better.But it was a big surprise that she died this morning,” Pastor Akinosun said.

Mrs Akinosun was born in 1946 at Jos, by Ogbomosho parents. She met Pastor Akinosun during a revival at CAC, Haliru Street in 1970. They got married in July 1971 and they celebrated their 50 years of marriage last July.

Mama Akinosun would be remembered for leading the Ministers Wives Fellowship of CAC to an era of positive growth.

The wife of the incumbent President, Mrs. S. K. Oladele and Mrs Odejobi, wife of the General Superintendent as well as Mrs J. Fasuyi, the Secretary of Ministers’ Wives Fellowship have visited the former President to commiserate with the family.

The Nollywood industry has been thrown into mourning as veteran actor Babatunde Omidina popularly called Baba Suwe is dead. The report of his passing was shared by actress Modupe Johnson otherwise known as Fali Werepe on her Instagram page. With tears emoji, the actress announced that the veteran actor is gone. Report has it that he died due to a failed health.