Emmanuel Bello, a middle-aged civil servant, has pleaded to an Agege Customary Court in Lagos to dissolve his marriage with Motunrayo, due to lack of care and threat to life.

Emmenuel, a father of four, who resides at Acme Road, Ogba, in the Agege area of Lagos, also wants the 19-year-old union dissolved on grounds of stubbornness, harshness to the children and other irreconcilable differences.

The petitioner, who described his wife as a debtor, said “she is too heady,not respectful and insultive”.

“She is not a loving wife and mother; she has no iota of respect.

On many occasions, she ran out of the house very early in the morning trying to escape from her creditors,” he told the court.

Bello claimed that when the embarrassment became unbearable, he had to refund the sum of N1.5 million to some of the creditors.

“When l noticed that my wife misbehaves and does not care about our children, l reported the matter to her family members, but it made no difference as she refused to change her attitude.

“My wife has been disrespectful and she no longer allows me to have sex with her”.

“Whenever we are together in the room, my wife puts on her underwear and knicker and does not allow me access to her.

“l kept hoping she will change for the better, but it became worse overtime, coupled with the fact that she became a party freak.

“l rented a shop for my wife to start a business, but she never contributed to the upkeep in the house.

“On so many days, she ran out of the house as early as 5.00 a.m. to avoid people she borrowed money from, without my knowledge. I ended up paying N1.5 million,” he claimed.

The petitioner alleged that his wife usually beat the children without any provocation.

“I no longer feel safe living with her.

“My life is not secured as she has vowed to deal with me,’’ Bello said.

The petitioner insisted on the dissolution of the marriage because he could no longer cope with his estranged wife’s misbehavior and irresponsible acts.

“I am no longer interested in the union; my wife does not care for me and beats my children habitually,” he said.

The petitioner prayed the court to give him custody of their children and to award him other consequential orders, as the court may deem fit.

The respondent, however, denied her husband’s claim that he had contributed to her business and also dismissed the allegations that she was not loving.

“I still love my husband and do not want to divorce him,” she said.

Motunrayo, a fashion designer, therefore, urged the court not to dissolve the marriage.

The respondent told the court that her husband does not like listening to her or heeding to her advice.

Motunrayo said that she only disciplines her children because she wanted them to be upright in life.

The court president, Mr Biola Alani, told the couple to remain calm and adjourned the suit until Aug. 3 for judgment.

Police arrest herbalist with Juju and human skull in Osun

The Osun State Police Command said it arrested a herbalist with human skull during its routine patrol on Ile-Ife-Ibadan road on July 7. This information was made known to the public by Mr Olawale Olokode, Osun Commissioner of Police, during the parade of suspects at the police command in Osogbo on Tuesday. Olokode explained that on July 7, at about 8.00 a.m., police team on routine highway patrol on Ile-Ife/Ibadan […] 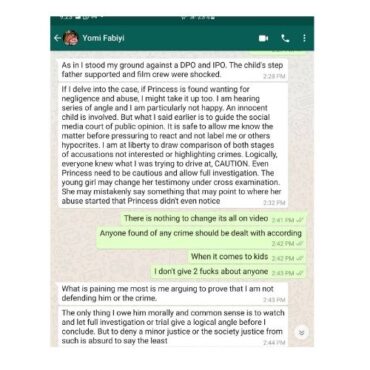