The Yoruba nation in London protest against the arrest of Igboho.

The Yoruba nation protesters in London stormed the British parliament to protest against the arrest of the activist.

In a live video by Heritage media on Facebook, protesters were seen with the Yoruba nation flag, placards and branded T-shirts with inscriptions such as #Leave Our freedom fighters alone, stop extrajudicial killings in southern Nigeria, Free Sunday Igboho, I stand with Sunday Igboho.

An unnamed speaker urged the supporters of the activist to be calm, saying “Igboho has not gone back to Germany as has been speculated.  He is still in Cotonou.

“We are calling on the regime of Muhammadu Buhari to leave our freedom fighters alone. We are tired of the killings in Yorubaland. Enough is enough.”

“The Nigerian government is still quiet two days after the arrest because it does not have control over the situation. There is a procedure that the law establishes including a repatriation hearing to determine whether the person in question has committed the offence and why he or she should be repatriated or not.”

The Republic of Benin has resisted Nigeria’s attempts to hastily extradite the Yoruba nation activist, Sunday Adeyemo, also known as Sunday Igboho, to the headquarters of the Department of State Services in Abuja. Information gathered that the Federal Government planned to extradite the activist on Wednesday (yesterday), but Benin Republic insisted that it would not be part of any process that was against due process. One of the lawyers of Igboho, […] 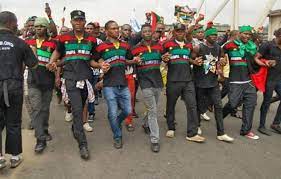