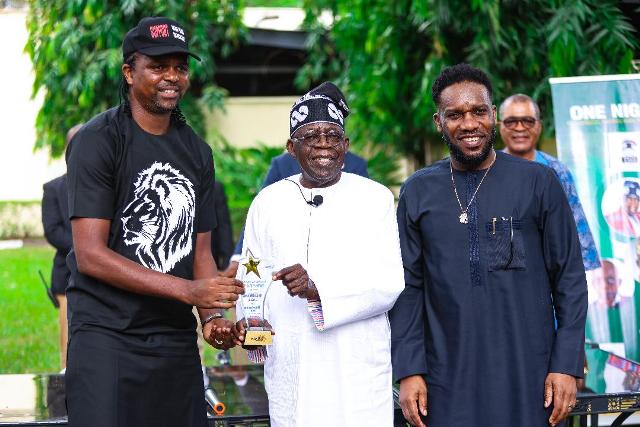 Lagos State Governor, Mr. Babajide Sanwo-Olu; his deputy, Dr. Obafemi Hamzat; led other dignitaries on Sunday, to honour the National Leader of the All Progressives Congress, APC, Asiwaju Bola Tinubu, with a novelty match in celebration of his 70 birthday.

Other dignitaries were: Minister of Youth and Sports, Mr. Sunday Dare; Nigerian Ambassador to Spain, Demola Seriki; Speaker of the Lagos State House of Assembly, Mudashiru Obasa, public office holders at federal and state levels among others.

The novelty match between ex-Super Eagles players and Team Lagos, which took place at the Mobolaji Johnson Arena in Onikan, Lagos included former and present members of the National Assembly, Lagos State Executive Council, Lagos State House of Assembly and local government chairmen, as well as members of the Governance Advisory Council, GAC, Lagos State APC executive members, among others.

The match, which also had in attendance, Tinubu, kicked off the ball, as part of the programmes organised by the Tinubu Support Group in conjunction with the Lagos State Government, to celebrate the APC National Leader’s 70th birthday, coming up on Tuesday, March 29.

Former Super Eagles Striker, Victor Agali scored two goals for the ex-international team led by Austin Jay Jay Okocha to defeat the Team Lagos, which was made up of former players of Stationery Scores and other clubs in Lagos State.

Agali scored the first goal 10 minutes into the second half from a brilliant pass from Julius Aghahowa. Agali net the second goal 12 minutes later through his head from a cross by Austin Okocha, who displayed brilliant and dribbling skills during the match.

Team Lagos was captained by the Speaker of Lagos State House of Assembly, Obasa. Instagram was inaccessible in Russia on Monday after Moscow accused its parent company Meta of allowing calls for violence against Russians, including the military, on its platforms. The move comes after Facebook and Twitter were blocked in early March as part of sweeping efforts by Moscow to control information available to Russians about its military operation in Ukraine. Instagram appeared Monday on a list of “restricted” online resources on a […]