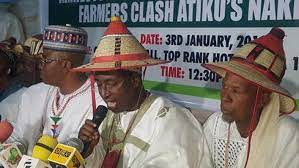 The Miyetti Allah Cattle Breeders Association Of Nigeria has denied issuing a 72-hour ultimatum to Delta State government to reverse its laws on open grazing.

Secretary-General of MACBAN, Usman Baba-Ngelzerma alleged that faceless individuals are behind the ultimatum only meant to create mischief.

He further described MACBAN as a responsible association with eminent personalities like the Sultan of Sokoto as its patron, and as such will never do anything to jeopardise the peace of the country.

Baba-Ngelzerma who however insisted that the position of the group on open grazing still remains, urged Northern Governors to ensure the recovery of all grazing routes in the country as Fulani herders have equal rights with all Nigerians and cannot be treated as second-class citizens.

Football star, Yaya Toure has been appointed as assistant manager of Russian Premier League side, FK Akhmat. The ex Barcelona and Manchester City star, now 38, began his coaching career at Ukrainian side Olimpik Donetsk. Following his spell there he has now been handed a one-year deal that will see him at the Akhmat Arena for the 2021-22 campaign. The four-time African Player of the Year winner is now expected […]